Canadian home sales declined in April, as rising mortgage interest rates and other affordability challenges kept more homebuyers on the sidelines. Industry data shows that home prices may have peaked in urban centres such as Toronto, signaling the first major shift in market sentiment since the beginning of the Covid-19 pandemic more than two years ago.

Canada’s housing market cooled to levels not seen since mid-2020, as sales transactions declined by 12.6% in April, according to the Canadian Real Estate Association (CREA). The Greater Toronto Area had a particularly outsized impact on the national decline. Most other markets saw double-digit drops, with the exception of Victoria, Montreal and Halifax-Dartmouth. Sales were down in 80% of local markets.

Average home prices, as measured by the MLS Home Price Index, declined 0.6% on the month, but were up 23.8% year-over-year. Regionally, most of the decline was in Ontario markets. Elsewhere, CREA described continued price growth in Eastern Canada as ‘robust’ and ‘modest’ across the Prairies.

The number of newly listed properties declined 2.2% compared with March as the sales-to-new-listings ratio fell back to 66.5%, which was the lowest level since June 2020. The long-running average for this metric is 55.2%. 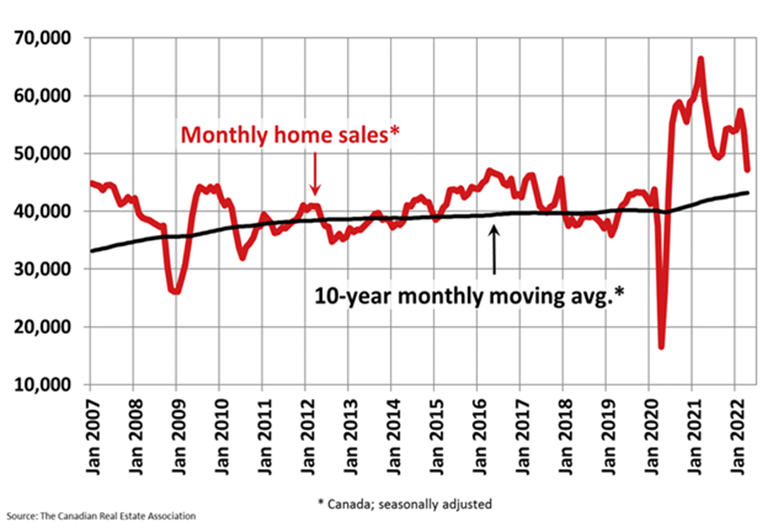 As rising interest rates take their toll on the housing market, demand for homes in major urban centres such as Toronto, Vancouver and Calgary has softened, according to RBC Economics. Between March and April, sales in these markets declined by 26%, 22% and 17%, respectively. In Toronto, new listings fell 13.8% during the month. Listings also declined 7.4% in Vancouver and 20% in Calgary.

A report from RBC Economics noted that home prices declined in Toronto for the first time since the Great Recession of 2008-09. “Toronto’s price plunge has now positioned the market into a more balanced territory,” wrote RBC economist Carrie Freestone, adding Vancouver and Montreal are trending in this direction as well.

Unemployment Edges Lower in May

Job creation moderated in April, as employers added 15,300 workers to payrolls, according to Statistics Canada. Economists had been expecting a monthly gain of roughly 40,000. Nevertheless, the monthly increase helped lower the unemployment rate by 0.1 percentage point to a new record low of 5.2%. Canada’s employment picture has improved considerably since the Omicron-induced lockdowns of January 2022. Over the past three months, employers in Canada added more than 425,000 workers. 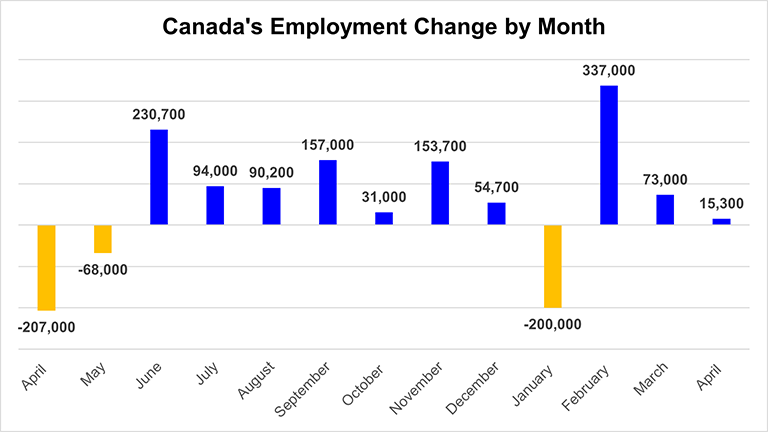 Equity markets have continued to decline over the past month, with Toronto’s TSX Composite Index sinking deeper into correction territory. The selloff has been more extreme for the S&P 500, with the index down over 8% in the past month, and almost 16% year-to-date. The technology-heavy Nasdaq Composite Index has declined 11.6% over the past month and more than 24% since the start of 2022. Tighter liquidity conditions, rising interest rates and geopolitical uncertainty have all contributed to volatile market conditions. 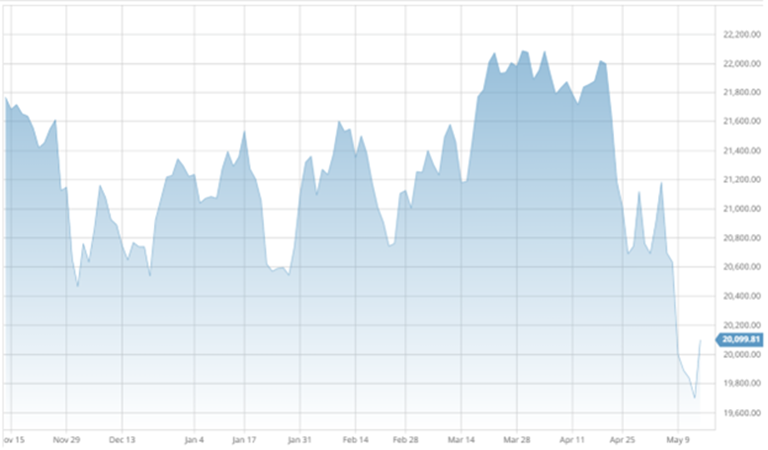 The TSX was down about 11% from peak to trough. Source: Barchart.com

After raising its benchmark policy rate by 50 basis points in April, the Bank of Canada (BoC) has signaled that monetary policy remains “too stimulative” to combat inflation. The BoC’s Deputy Governor Toni Gravelle said the central bank needs to get back to a “neutral range” of between 2% and 3% and is prepared to move aggressively to reach its rate target. The BoC’s policy rate is currently 1% following two successive rate hikes in March and April.

CMI Financial Group continues to analyze market changes and aims to keep you updated on a regular basis.