Canada’s housing market cooled at the end of the first quarter, as supply constraints weighed on sales activity and contributed to another uptick in home values. Meanwhile, the federal government announced several supply-boosting initiatives in its 2022 budget to help alleviate shortages across the country.

National home sales declined by 5.4% in March, according to the Canadian Real Estate Association (CREA). The decline was largely attributed to a 5.5% drop in newly listed properties. Actual sales have retreated 16.3% from the record high set in March 2021. Home values were down in half of all major local markets in March, led by declines in the Greater Toronto Area and Calgary. Despite the decline in these markets, the MLS Home Price Index was up 1% from February and 27.1% year-over-year.1 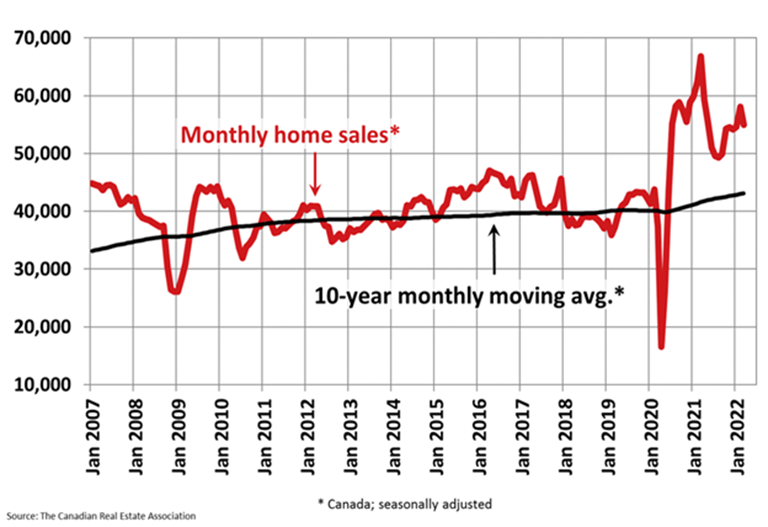 Finance Minister Chrystia Freeland announced 29 housing-related measures in the federal government’s 2022 budget – measures that are intended to increase the supply of real estate and make purchases more accessible to first-time buyers. The new measures include loans and funding programs, a national housing co-investment fund and an affordable housing innovation fund. According to a report by RBC Economics, the new programs amount to $10 billion over five years and mainly reflect the Liberal Party’s 2021 election platform. RBC’s Robert Hogue predicted that Canadians shouldn’t expect quick relief in terms of housing affordability given that most of these programs won’t be effective for some time.2 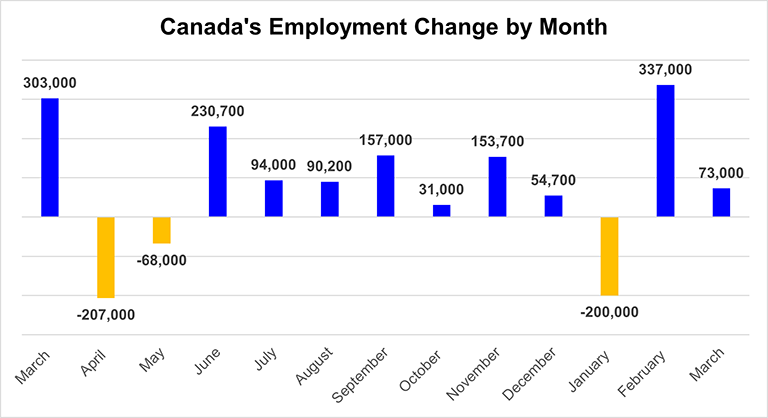 On the labour front, Canadian employers added 73,000 workers to payrolls in March as the unemployment rate fell 0.2 percentage point to 5.3%, marking the lowest recorded level in history. Employment increased in both goods- and service-producing sectors, as capacity limits and proof-of-vaccination requirements were lifted across several provinces. Average hourly earnings, which are a proxy for wage inflation, increased 3.4% on a year-over-year basis.

The S&P/TSX Composite Index has largely outperformed its counterparts on Wall Street, as surging oil prices fueled a rally for Canadian commodity producers. The benchmark TSX gained 3.1% during the first quarter, outperforming the S&P 500 Index by more than 13 percentage points – the widest outperformance in 13 years. On a macro level, the shift away from risk-on assets due to the war in Ukraine and tighter monetary conditions are seen as headwinds for stocks.

The Bank of Canada (BoC) voted to raise interest rates by 50 basis points on April 13, as policymakers continue to mount a coordinated response to rising inflation. The 50-basis point hike was the largest single move by the BoC in more than two decades. In addition to raising the overnight rate to 1%, the BoC announced it would begin unwinding its quantitative easing program beginning April 25. Home buyers are impacted by rising rates as banks and other traditional lenders begin to pass on the higher costs to consumers. It remains to be seen whether the BoC’s policy shift will have a substantial impact on mortgages and the broader housing market.

Assets under management for CMI Mortgage Investments and CMI MIC Funds continued to grow in the first quarter, reflecting strong investor demand for private mortgages. Assets under management in the CMI MIC Balanced Mortgage Fund, which provides a passive investment opportunity in a diversified pool of mortgages, grew 11% in the first quarter of 2022 and 114.1% year-over-year compared with March 2021. The number of investors has nearly doubled over the past 12 months.

The CMI MIC High Yield Opportunity Fund, which is designed for slightly higher risk profiles with the aim of generating above-market returns, had assets under management grow by 64.3% during the first quarter of 2022 and 753.5% year-over-year compared with March 2021.

The CMI MIC Prime Mortgage Fund, which employs a more conservative allocation using a risk-mitigated portfolio of multiple mortgages, was stable during the first quarter of 2022. Net assets under management grew 132.5% year-over-year compared with March 2021.

CMI Financial Group continues to analyze market changes and aims to keep you updated on a regular basis.