Vancouver is a bustling west coast seaport in British Columbia and is among Canada’s densest, most ethnically diverse cities. It is a popular filming destination surrounded by mountains and scenery that inspire art, theatre and music. The 2016 census recorded 631,486 people in the city, an increase of 4.6% from the previous census conducted in 2011. It has a population density of over 5,400 per square kilometre, just behind New York City, Guadalajara, San Francisco, and Mexico City.

Though densely populated, Vancouver has consistently topped worldwide cities in terms of livability and quality of life. Formerly named “Gastown,” Vancouver has been a vital trade route between Asia and Europe since the 19th century. As of 2014, the Port Metro Vancouver sits as the third largest port by tonnage in the Americas and twenty-seventh in the world. Despite this prestige as a port city, forestry remains its largest industry. The city also boasts an urban setting surrounded by nature, making tourism its second largest industry.

Vancouver has hosted many international conferences and events such as the British Empire and Commonwealth Games in 1954, Expo 86, and the World Police and Fire Games in 1989 and 2009. Along with Whistler, a resort community in the north of the city, Vancouver also hosted the 2010 Winter Olympics and Paralympics.

Indicators of the health of an area’s real estate market are the quantity and the value of issued building permits.

The city of Vancouver has issued, since January of 2018, a total of 18,059 residential and non-residential building permits, just 600 permits below Edmonton and fourth among all the major cities in Canada. The value of these Vancouver permits, amounting to almost $13.1 million, is the second largest across major cities, bested only by Toronto.

During the first quarter of 2018, there were a total of 4,026 issued building permits with a value of $2.6 million. The number of permits issued during this quarter was just 4.1% below the quarterly average that year, and the amount of the issued permits also fell below the average quarterly value by 14.1%. 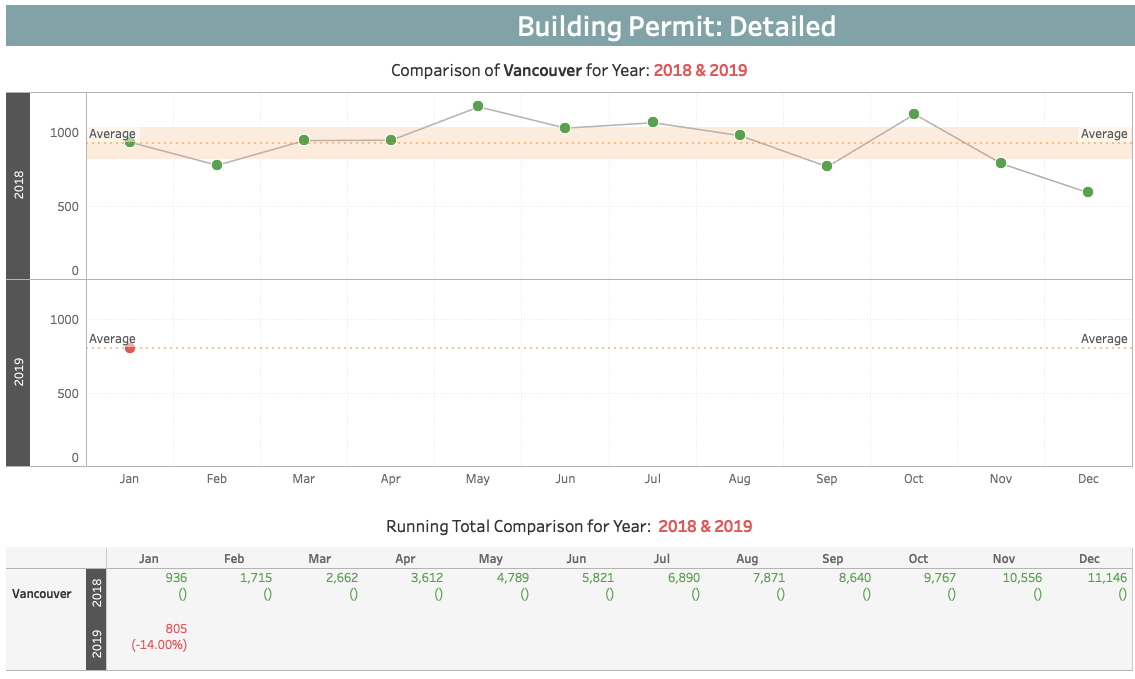 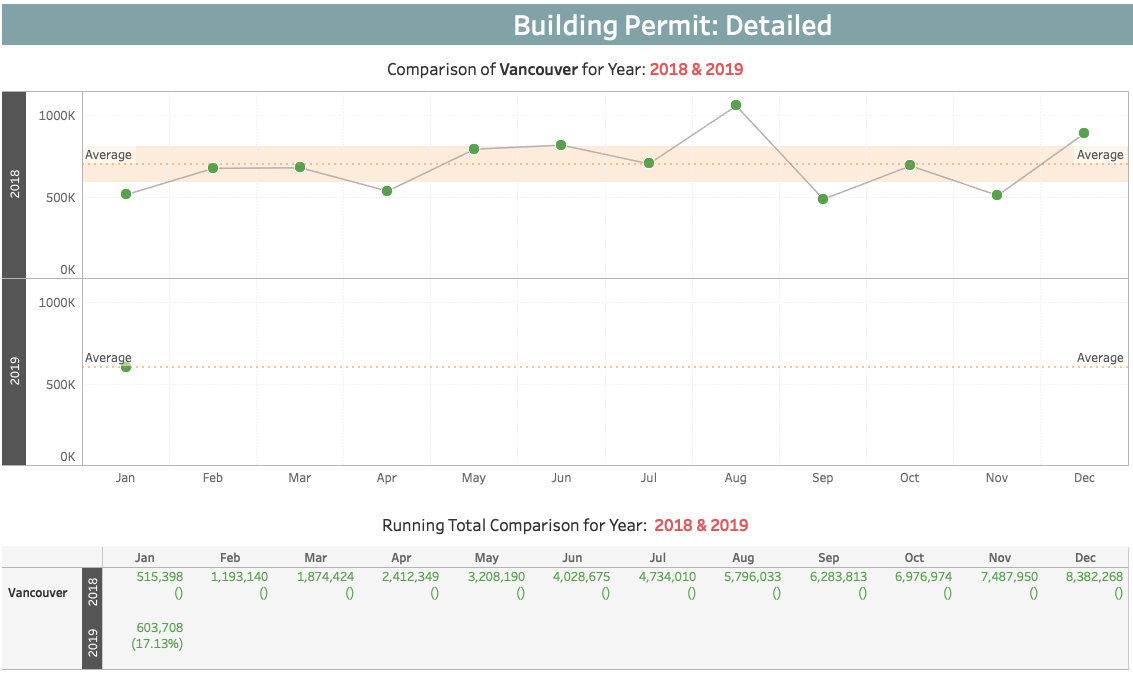 In terms of housing starts, this year’s first quarter was not as promising as last year’s. Vancouver had a total of 2,067 housing starts in the month of January, down by 20.47% compared to January 2018’s 2,599. February 2019 saw 1,999 housing starts, another 3.2% decrease from the previous month. However, this was a minimal drop; more importantly, when compared to the same month of the previous year, February 2019’s number is way higher by 379 units, an 18.9% increase. 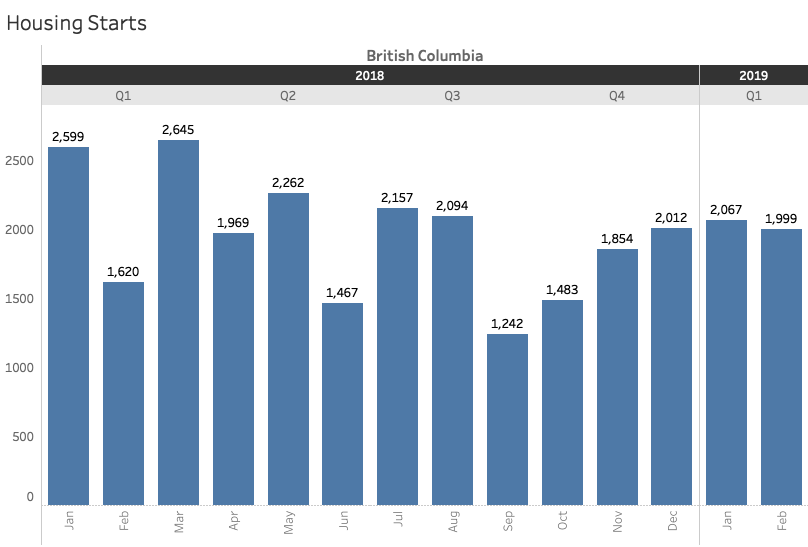 In this quarter, apartments and other kinds of units dominated the housing types, accounting for at least 77.26% of housing starts.

Single-detached units accounted for 9.68% to 10.41% of the total housing starts, 6.44% to 6.79% lower than last year’s January and February records. Row units came third with a 10.78% share. Notably, apartments and other structures are on the rise, while single-detached buildings and units with row housing types are seeing a decline.

In comparison to other cities, it is clear that Vancouver has had the highest number of monthly housing starts since January of 2018. The housing starts in January and February 2019 were more than twice (220.9%) the average of all cities and 210.4% higher in February.

With a monthly average of 42,186, Vancouver’s constructions in the year 2018 were pretty consistent. 2019’s numbers, on the other hand, were relatively lower. Lower year-on-year housing constructions were seen this quarter. January’s 40,523 constructions were a 4.2% decline from last year’s 42,312. February had a less dramatic drop of 1% from the same month of the previous year. 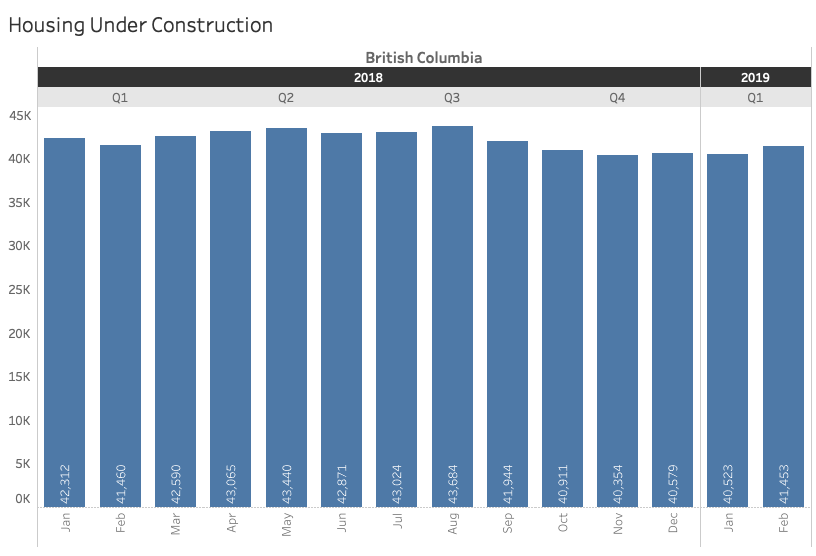 Most of the units under construction this year, which comprised 80.32% of the total units in January and 81.03% in February, were apartment-type buildings and other types of housing, a slight increase of 1.34% and 1.69% from the same months of the previous year. Only about 11.5% of them were single-detached (about 2,746 units), slightly lower (-0.78%) than the average percentage of single-detached homes under construction from January and February of last year (12.28%).

Year over year, the percentage of apartment-type homes along with other housing types were higher by 1.34% in January and by 1.69% in February. The number of these types of units under construction went down from January 2018’s 33,419 to this January’s 32,547. February, on the other hand, experienced an increase from last year’s 32,893 units to this year’s 33,591. 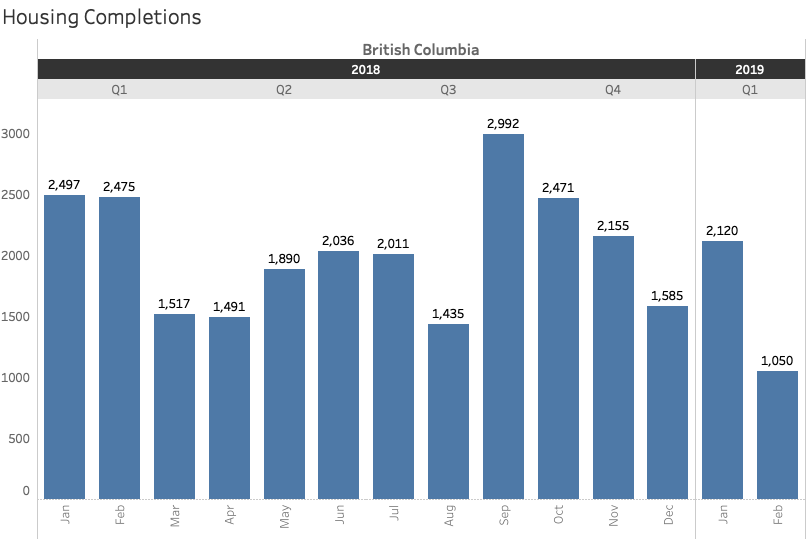 In terms of completion, Apartment-type properties, contributing over 68% of total completed housing units in January and almost 50% in February, still dominate over single-detached, row type housing, and semi-detached houses. Compared to the same months of the previous year, these percentages were higher by 1.82% in January and down by almost 20% in February.

Vancouver tops other cities in British Columbia in terms of the number of housing completions beginning in January of 2018. Housing starts in the first two months of 2018 were relatively high with almost 2,500 recorded completions. However, the corresponding months of this year did not show as much promise, with January experiencing a 15.1% drop and February seeing a dramatic 57.6% decline.

The first quarter of 2019 still has a lot of houses under construction with over 80,000 units compared to the 1,260 issuances of building permits, 4,066 housing starts, 3,170 completions, and 2,515 absorbed properties. Evidently, these numbers are relatively lower compared to the same period last year. Furthermore, these numbers were also lower than the previous quarter’s.

The number of issued building permits was starting to decline in Q2 of the previous year, and this quarter’s issuances were a record low compared to previous quarters. The same trend is happening in housing starts, although the decline was already happening in the first quarter of 2018. The number of houses under construction was on a quarterly rise at the beginning of 2018, but the trend eventually reversed. By Q4, there were less building permits being issued, and more absorptions occurring.

There were even less issued building permits in Q1 of 2019, with only 1,260 of them compared to the 3,860 issued in the previous quarter. Apart from that, there were less housing starts during this quarter, which may have been caused by a lower number of issued permits in Q4 of 2018.

This quarter saw only 81,976 houses under construction in comparison to the previous quarter’s 121,844. These were the houses that were started quarters before and had not yet been completed. This may be why there were less housing starts and building permit issuances in Vancouver, despite the rise of a multitude of structures that make the market look more saturated than it is. The reality is that the houses completed in this quarter are only a tiny fraction of the houses still under construction.

It is safe to think that vacancy rates are still low enough to rake up some steady rentals, but only for a time.It should be noted that the quarterly absorption rates are about half of the completed housing units. This may already be the start of absorption rates decreasing. Rental rates may also start to slide as the houses under construction are completed. In accordance with the trends of average prices over time, the dwindling of issued building permits, housing starts, and absorption rates will force real estate owners to decrease the rental rates in Great Vancouver.