The 5 Most Important Graphs for Canadians to Watch in 2021

After an unprecedented year, 2021 brings hope of revival for public health, the economy, and personal finances. For many Canadians, however, the new year began with strict lockdown orders that mirrored the first pandemic wave in March. Although the World Economic Forum is talking about the “great reset,” most Canadians are merely looking for a semblance of normalcy in the wake of the pandemic.

While nobody knows for sure when life will return to normal, there are five charts Canadians should monitor if they wish to truly gauge the post-Covid recovery. These charts provide a good barometer for assessing the performance of our economy and the resilience of our public health system in 2021.

Covid’s second wave has been much more severe than the first. | Source: CBC

The number of daily Covid-19 infections is perhaps the single-most important indicator to keep track of in 2021. Cases skyrocketed in the fall, eventually peaking in January before levelling off in the latter half of the month. In terms of raw numbers, the second wave has been far more severe than the first.

Provinces across Canada locked down their economies in the fall to combat the spread of the virus. Ontario issued a stay-at-home order, Quebec implemented curfews, and some Atlantic provinces restricted travel.

Provincial governments are monitoring their caseloads as they carefully begin the process of reopening their economies. So long as regions remain in lockdown, the prospect of a healthy economic rebound could be jeopardized.

The silver lining is that highly effective treatments to reduce the severity and spread of Covid-19 are on the way. Despite being delayed in transit, vaccines are expected to arrive in greater numbers over the coming months with most Canadians expected to be vaccinated by the third quarter. 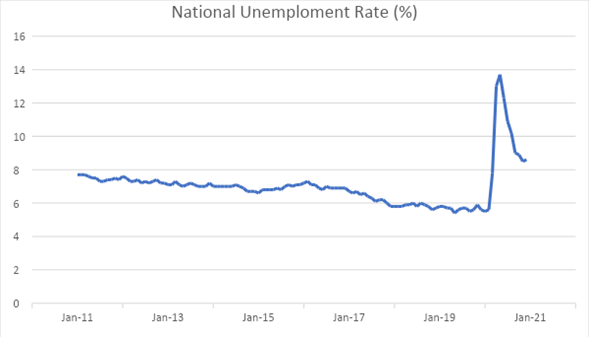 Canada’s unemployment rate peaked in May 2020, but the path to pre-pandemic levels remains a way off. | Source: Statistics Canada

Canada’s employment picture improved significantly throughout 2020, as the nation recouped millions of jobs that were lost during the first wave of the pandemic. Between May and November, the nation added more than 2.6 million jobs, partially recouping the more than 3 million jobs lost in March and April combined. The unemployment rate also fell from a record high of 13.7% in May to 8.5% in November. The jobless rate ended the year at 8.6%.

The national unemployment rate was 5.6% before the pandemic began. A sustained decline back towards that level would offer a compelling sign that the economy is returning to normal.

For Canada’s employment picture to return to pre-pandemic levels this year, the economy would need to add roughly 100,000 jobs per month, which is much larger than typical recoveries. Assuming a more modest pace of expansion, a full employment recovery could take until the end of 2022. In the meantime, the unemployment rate could provide important clues about our return to normal. Although joblessness has declined significantly since the spring of 2020, it remains well above pre-pandemic levels. The labour recovery stalled in the fourth quarter as more provinces reverted to lockdown measures. 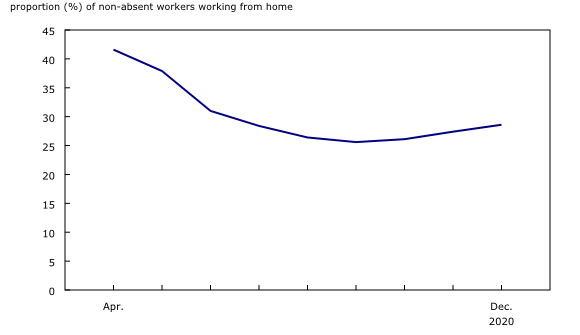 By the end of 2020, more than a quarter of Canadians were still working from home. | Source: Statistics Canada

The pandemic appears to have accelerated a societal and attitudinal shift towards decentralization, as more people work from home than ever before. During the first wave of lockdowns, Statistics Canada reported that nearly 42% of employees worked from home. Although that figure has declined over the past six months, more than a quarter of Canadians are still working remotely.

It appears that a large segment of the knowledge economy has shifted permanently or semi-permanently to remote work. More employers have acknowledged that their staff can effectively do their jobs at home. In fact, a quarter of Canadian businesses expect that 10% or more of their staff will continue to telework after the pandemic is over. So, while it’s reasonable to expect that telework will decline once vaccinations are rolled out, a large segment of the population will probably continue to work from home.

Work-from-home trends over the next 12 months could signal an important shift underway in the economy. If the trend continues, as many expect it should, work-from-home could have a significant impact on housing trends, public transportation, and even gasoline purchases. 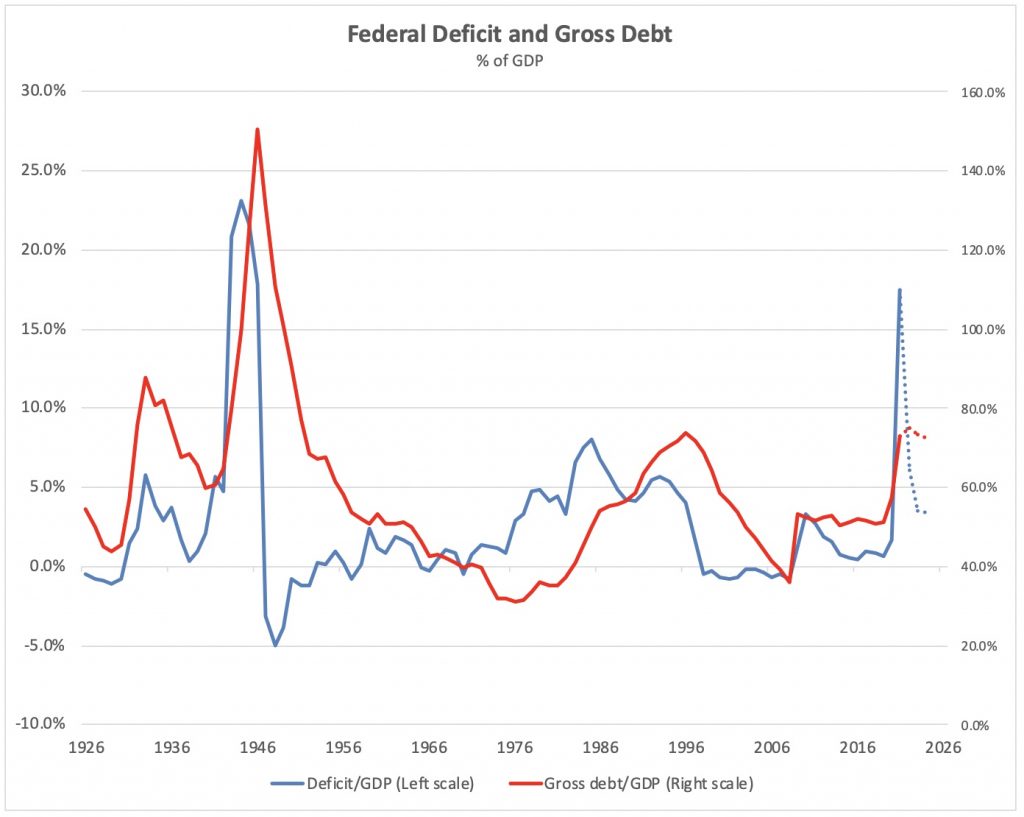 Canada’s deficit-to-GDP has reached the highest level since the Great Depression. | Source: Macleans

When it comes to the federal deficit and gross debt, there’s no way to sugar coat it: Government lockdowns have put significant strain on our finances. As the chart above illustrates, there have been four spikes in federal government deficits and debt over the past 100 years. We are currently living through the fourth one.

Projections based on Chrystia Freeland’s Fiscal Update show that debt-to-GDP levels are expected to remain well above pre-pandemic levels for the next several years. At the peak, the deficit is expected to reach 17.5% of GDP. The gross debt is projected to hit 79% of GDP.

From inflation to higher taxes, massive budget deficits can have several unintended consequences. Last November, Ottawa said it expects the federal deficit to exceed $381 billion due to emergency spending. Deficit projections could shift in the coming months as the federal government revises its fiscal outlook. These projections will serve as a benchmark for evaluating the severity of the public health crisis and its impact on public finances.

You should be monitoring condo listings and rental patterns in Canada’s most populous city. | Source: Ben Rabidoux (North Cove Advisors)

We don’t like to take a Toronto-centric approach to understand the Canadian economy, but there’s no denying that the GTA is our nation’s population epicenter. What happens in the Greater Toronto Area, where one-fifth of our population is housed, has profound implications on the entire nation.

The pandemic placed downward pressure on Toronto’s once booming condominium market as shifting workforce trends pushed more people away from city centres. A sharp decline in immigration also put a damper on the local rental market. At one point during the pandemic, net migration to Canada had declined by a staggering 94%. Around the same time, the number of new listings in Toronto rose sharply as overall condo rentals declined year-over-year. The chart on the right highlights the decline in bachelor, one-bedroom, and two-bedroom rentals over the past year.

The performance of Toronto’s condo market over the next 12 months will be an important proxy for the recovery, especially as it relates to immigration, which is one of Canada’s biggest sources of population growth and economic output. RBC Economics says migration is unlikely to recover to pre-pandemic levels in the near future.

If the pandemic taught us anything, it’s that Canadians know how to save during periods of uncertainty. Personal savings reached an all-time high in the second quarter of 2020, helping to kickstart a massive housing recovery. How those savings are deployed in 2021 could provide important insights into the post-pandemic recovery. If more savings lead to higher spending, Canada could experience a strong economic recovery. After all, roughly two-thirds of our GDP is based on consumption.

If Canada’s economy recovers favourably over the course of 2021, we can expect to see a gradual decline in unemployment, a steady dip in teleworking and the levelling off of federal debt. Toronto, like other major population centres across Canada, would likely see a recovery in the condo market as immigration begins to rebound. These trends would likely be supported by a decline in daily Covid-19 cases.

CMI has a proven track record in the private mortgage market, having successfully funded more than $500 million in loans across Canada. To learn more about our investment process, contact one of our Investment Account Managers today.