CMI State of the Market: Canada’s Housing Market Continues to Rebalance as Sales Drop in June

Canadian home sales declined for a fourth consecutive month in June, though the pace of declines moderated, signaling that local markets were gradually achieving balance following a surge in demand during the pandemic.

Real estate transactions were down across most of Canada in June, with national home sales falling 5.6%, according to the Canadian Real Estate Association (CREA). Roughly three-quarters of all local markets registered a decline in sales, led by the Greater Toronto Area, Greater Vancouver, Calgary, Edmonton, Ottawa and Hamilton-Burlington.

Declining home sales also pushed down average home prices, albeit slightly. The MLS Home Price Index edged down 1.9% compared to May but was still up 14.9% year-over-year. Housing inventories, which remain near historic lows, rose 4.1% during the month. 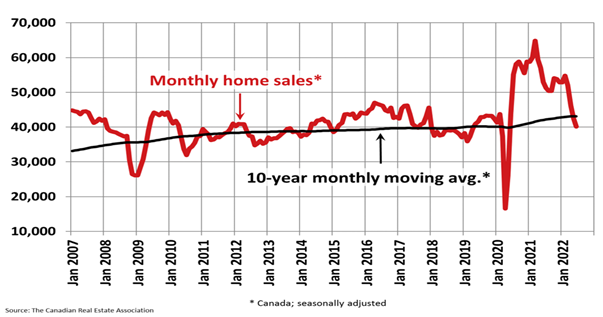 The state of Canadian real estate is shifting from a seller’s market to a “balanced zone,” according to RBC Economics. This dynamic is being driven by cooling demand and a higher number of listings, pushing the sales-to-new listings ratio down across all regions. Toronto and Vancouver have seen the biggest moderation in sales activity, which is consistent with CREA’s reporting.

Employment Declines in June as Fewer People Look for Work

Canada’s labour market unexpectedly shed jobs in June for only the second time in 12 months, led by a sharp decline in the service-producing sector. Service employment decreased by 76,000 during the month, more than offsetting the 33,000 hired in June in the goods-producing sector. Average hourly earnings jumped 5.2% year-over-year, up from 3.9% in May. Unemployment reached a new record low of 4.9%, though Statistics Canada attributed the decline to fewer people actively looking for work. 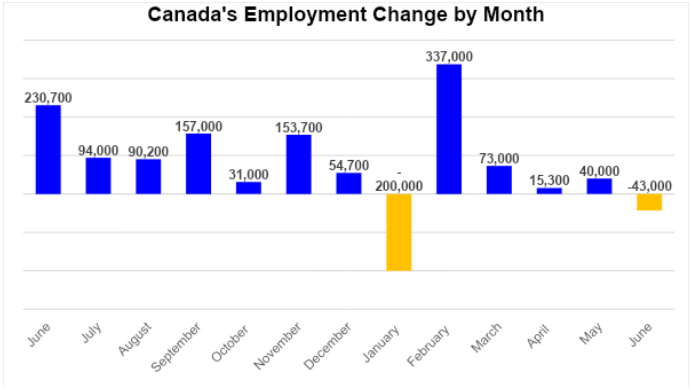 North American equities continued moving lower throughout June and early July, reflecting subdued risk sentiment in the wake of multiple interest rate hikes by the Federal Reserve and Bank of Canada (BOC). Canada’s benchmark TSX Composite Index fell below 18,400 in July, its lowest level since March 2021. In the U.S., the S&P 500 Index met the technical definition of a bear market, which is defined as a drop of 20% or more from a recent peak. 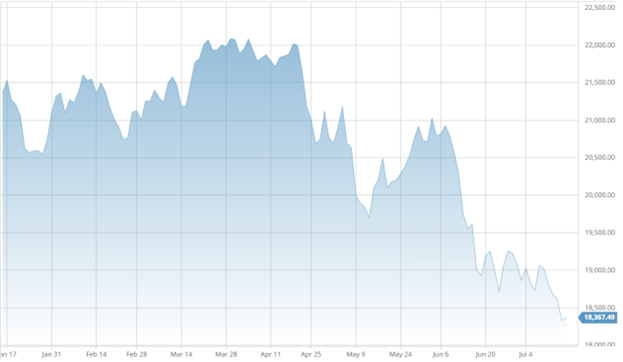 The TSX Composite Index is down over 17% from its record high. Source: Barchart.

With Canada’s inflation rate reaching 31-year highs, the BOC moved to aggressively raise interest rates in July, initiating its first 100-basis-point hike since August 1998. The benchmark policy rate currently sits at 2.5%. Policymakers are expected to continue raising rates amid expectations that inflation will average around 8% in the second and third quarters of 2022. Central bank policy and its effect on mortgage rates will continue to impact housing demand in 2022.

Despite uncertainty in the housing market and overall economy, demand for private mortgages in Canada remains robust. As a result, assets under management for CMI Mortgage Investments and CMI MIC Funds continued to grow in the second quarter. Assets under management (AUM) in the CMI MIC Balanced Mortgage Fund, which provides a passive investment opportunity in a diversified pool of mortgages, grew 28% in the second quarter of 2022 and 100% year-over-year compared with June 2021. The number of investors has grown 60% over the past 12 months.

The CMI MIC High Yield Opportunity Fund, which is designed for slightly higher risk profiles with the aim of generating above-market returns, had assets under management grow by 15% during the second quarter of 2022 and 161% year-over-year compared with June 2021.

The CMI MIC Prime Mortgage Fund, which employs a more conservative allocation using a risk-mitigated portfolio of multiple mortgages, was stable during the second quarter of 2022. Net assets under management grew 128% year-over-year compared with June 2021.

CMI Group continues to analyze market changes and provide updates on a regular basis. Visit our website to learn more.