CMI State of the Market: Housing Activity Cools Across Canada

Canada’s housing retreat continued in July, as rising interest rates and declining demand continued to place downward pressure on local markets. While most regions are witnessing price declines, Ontario and parts of British Columbia are seeing the steepest corrections.

Canadian home sales were down again in July as affordability concerns kept many would-be buyers on the sidelines. Home sales fell 5.3% month-over-month, according to the Canadian Real Estate Association (CREA). While it was the fifth consecutive month-over-month decline in housing activity, it was also the smallest.Three-quarters of local markets reported a decline in sales, led by the Greater Toronto Area, Greater Vancouver, Calgary and Edmonton. Actual monthly activity was down 29.3% compared with July 2021. Meanwhile, the number of newly listed properties declined by 5.3% compared with June, driven by declines in three-quarters of local markets, including most large Canadian cities.

The MLS Home Price Index (HPI) was down 1.7% from the previous month but still up 10.9% compared with July 2021. Declines were primarily felt in Ontario, but prices have also softened in areas of British Columbia. Prices remained flat in the Prairies while Quebec has begun to show signs of a nominal decline. The Maritimes continued to experience a rise in prices, though transaction volumes have slowed. 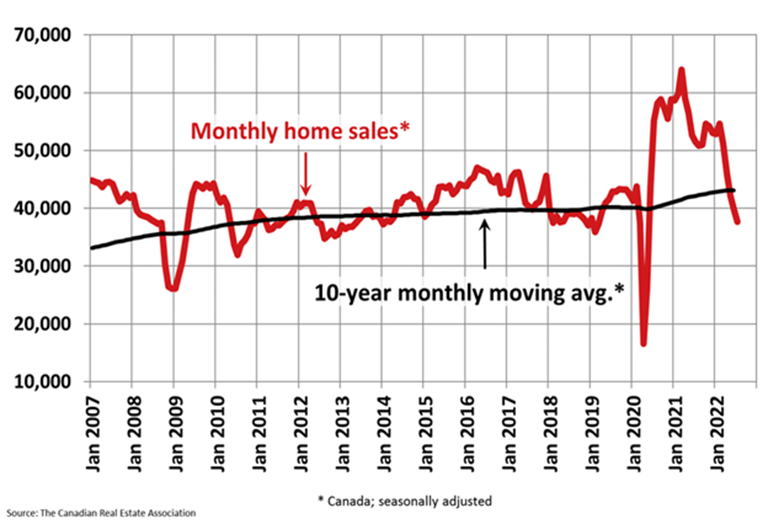 Price Correction Is “Spreading,” According to RBC Economics

Canadian housing is a “market in retreat,” according to RBC economist Robert Hogue, with rising mortgage rates expected to trigger a steeper decline in national home prices. Nationally, home prices could fall between 12% and 13% over the next year. In addition to higher borrowing costs, policymakers are shifting their focus to addressing supply-side challenges, factors that could improve affordability over the longer term.

Housing corrections continue to spread across most of Canada, including the Prairies and Quebec. Some analysts may view recent activity as a return to rational and realistic prices that will lead to a more sustainable long-term housing market. Many analysts have noted resale values on a year-over-year basis still reflect positive growth as well.

Canada’s labour market was largely unchanged in June, as overall employment edged down by 31,000 jobs. The unemployment rate held steady at 4.9%. July was the second consecutive month that employers shed jobs, according to Statistics Canada. Public sector jobs were responsible for the bulk of the decline, with Ontario seeing most of the losses. Since May, overall employment in Canada is down by 74,000 jobs.

Canadian and American stock markets have staged a large relief rally since mid-July, fueled by positive earnings surprises and expectations that most major economies are approaching “peak inflation.” Recent Canadian data supports this, as the country’s inflation rate slowed to 7.6% in July, down from 8.1% in June.

The presence of extreme oversold conditions may have spurred equities higher through the summer. The so-called ‘bear market rally’ pushed the TSX Composite Index back above the 20,000 mark. In the United States, the technology-heavy Nasdaq met the technical definition of a bull market after rallying 20% from its previous low. The S&P 500 and Dow Jones Industrial Average have rallied considerably from their lows of the year as well. 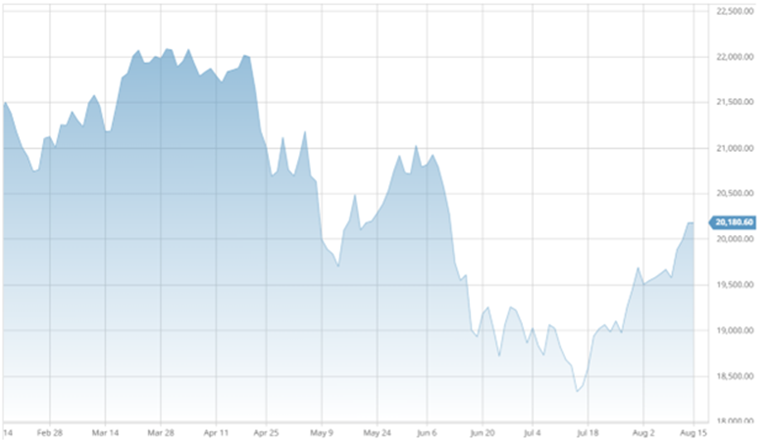 Canada’s inflation rate accelerated further in June, as the Consumer Price Index (CPI) reached 8.1%, its highest level in nearly 40 years, before cooling slightly in July. Record inflation strengthens the Bank of Canada’s (BoC) resolve to continue hiking interest rates again, which it has done in each of the last four policy meetings. The central bank is scheduled to deliver its next policy verdict on September 7. According to most economists polled by Reuters, the BoC is likely to raise rates by another 50 basis points