Ottawa has been among the hotter markets in Canada over the past year with the average sale price of residential property climbing 7.4% from April 2018 to April 2019 bring the average residential price to $488,729. The condominium sector, in particular, witnessed the most substantial gains of 14.3% over the same period. While the share of income required to cover the costs of owning a home fell 0.7% to a national average of 51.9%, the cost of homeownership is still outside the reach of many Canadians.

Ottawa fared better on this scale sitting at 40.6% in the fourth quarter of 2018. According to RBC’s aggregate affordability measure, Ottawa reached a 24 year high. Still, when compared next to Toronto, sitting at 66.1%, it remains a relatively affordable city. As part of the RBC affordability study, the difference between the ownership costs of an average condo and the rent of a two-bedroom apartment are evaluated on a quarterly basis across major Canadian cities. To add an additional perspective, residents in Ottawa are far closer to home ownership where they require an additional $220 per month to achieve homeownership compared to 1,138 for residents of Toronto.

The rising costs of home ownership, along with the increased pressure of the mortgage stress tests, has placed more pressure on the condo sector. Tight demand-supply conditions continue to bolster confidence in early 2019. The continued price climbs are mainly attributed to a drying up of inventory with the condo sector being impacted the most. Residential inventory is down 18% while condo inventory is down nearly 40% from April of 2019 compared to the same month last year. Absorption rates are outstripping residential supply and causing approximately one-third of properties to sell above their asking prices.

Latest data from Statistics Canada indicates that the population of the wider Ottawa–Gatineau metro area (which includes Ottawa, Gatineau and some surrounding areas) is 1,377,016 people up by 15.9% since 2007. This makes it the fifth largest census metropolitan area in Canada. The region grew at a considerably higher rate of 5.5% from 2011 to 2016 compared to Ontario (4.6%) and Canada (5%).

The 2016 census found a steadily increasing number of immigrants settling into the capital, making up about one-fifth of the capital region’s population. There were approximately 37,800 new immigrants arriving between 2011 and 2016 bring the total immigrant population close to 255,800.

Though the majority of Ottawa’s adult population owns their homes, the number now choosing to rent is increasing at triple the rate of those buying property. Of the 535,500 households in the Ottawa-Gatineau area, 66% own their homes while the balance of 34% rent.

Ottawa is an affluent city when it comes to the pool of talent. The city has the highest number of residents with post-secondary education in Canada. There are 761,420 individuals with an educational background from 15 years old and over. Below is the summary of individuals and their major fields of study.

With the public and high technology sectors being the primary industries in Ottawa, employment opportunities attract highly educated individuals along with strong incomes. Ottawa recorded the highest proportion of households with an after-tax income of over $100,000 back in 2016. Only Calgary (39%) and Edmonton (33%) were marginally ahead. Additionally, the highest percentage of bachelor degree holders (43.5%) reside in Ottawa making the city a highly educated and skilled workforce.

Ottawa’s unemployment rate climbed 0.4% in April as more residents joined the labour market while the total number of jobs fell according to recent statistics data released by Statistics Canada. The unemployment figure in April stood at 5.5%, up from 5.1% in March and the highest rate in the city since December of 2017. The downturn in the job market came despite big gains from two of the region’s largest employment sectors – public administration and high tech.

In February, other types of housing, including apartment-style ones, took up 67.25% of all housing starts. These housing types rose from 27 to 460 units—an astounding 1600% increase from the previous month.

It was not only apartment-type housing that picked up its pace. The housing starts of row units increased more than twofold—from 64 to 137 units and a 3.9% rise can also be seen in single-detached housing starts. Overall, February housing starts almost tripled (270%) with 684 units in total. 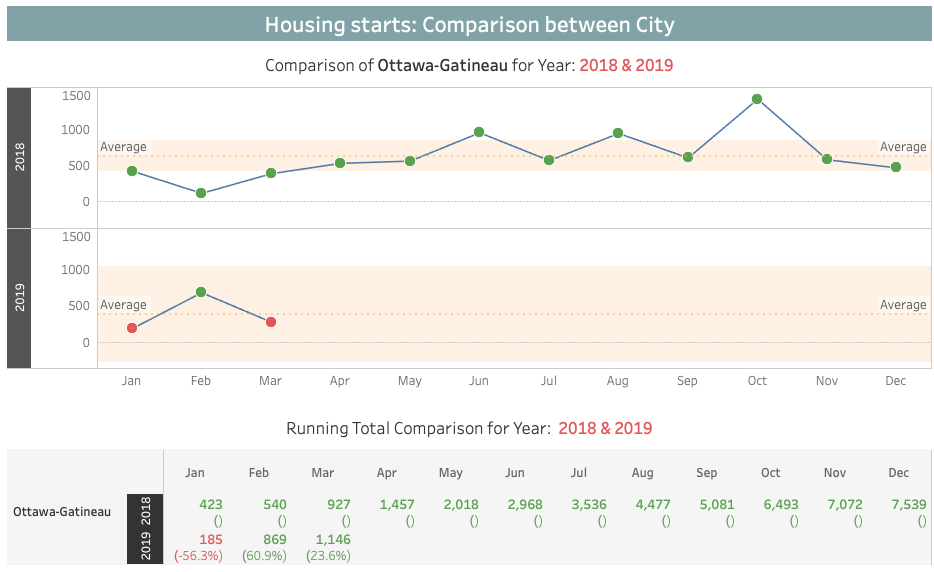 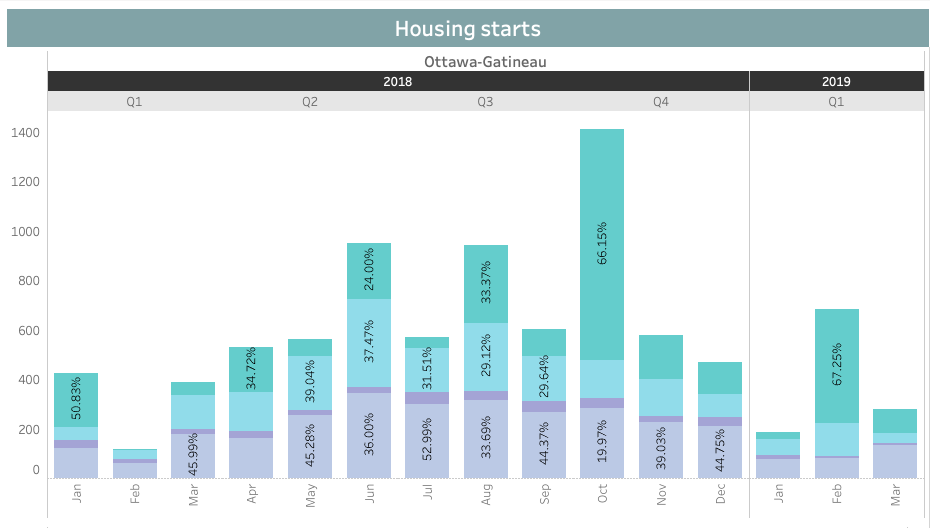 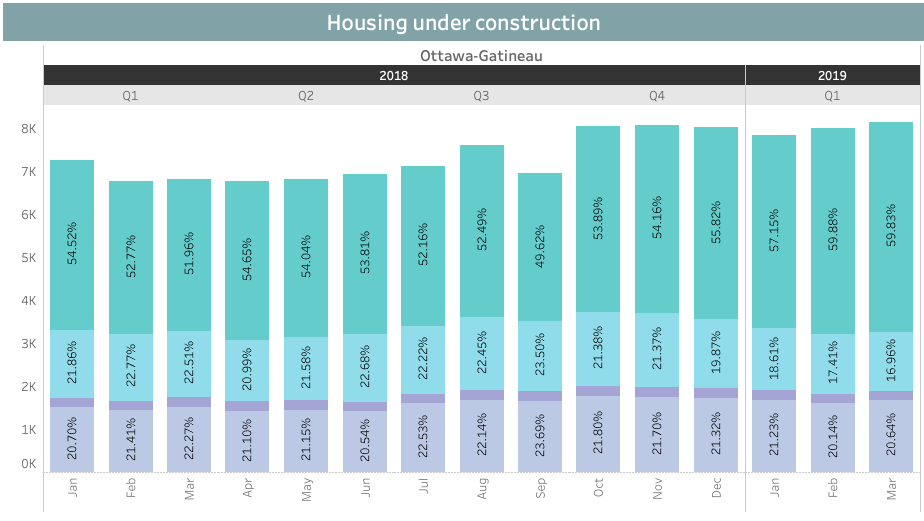 The number of constructions in the first 3 months of this year were all above the previous year’s performance: 8.10% in January, 18.01% in February, and 19.20% in March. Overall, the housing constructions in the first quarter of 2019 decreased slightly by 0.82% if compared to Q4 of 2018, but increased by 14.96% compared to last year’s first quarter.

Among housing unit types constructed since the start of 2019, apartment and other unit types which are not single-detached and row houses topped the list of the most number of units under construction. Of the units being built in the first quarter of this year, more than half (58.97%) were apartment and other housing types, 26.77% were single-detached homes, and 17.65% were row-unit types.

Housing completions for the first quarter this year, which totalled 1,046, saw a steep decline of 23.53% from last quarter’s 1,368 completions. The row-type units prevailed over other housing types, contributing 42.83% of all houses completed during this period. There were only 321 completed single-detached homes this quarter—a 51.14% downturn from the previous quarter’s 657 units and 22.09% lower than the first quarter of 2018. With only 144 units, March proved to be the month with the least completions. Most of these completions, specifically 44.44% of completed houses, were single-detached units, while row-unit types contributed 38.89%.

The first quarter of 2019 still has many houses under construction with almost 24,000 units vis à vis the 834 issuances of building permits, 1,146 housing starts, 1,046 completions, and 418 absorbed properties. Evidently, these numbers are relatively lower compared to the same period last year— with the exception of house absorptions. These numbers were lower than those recorded in the same period of last year in terms of building permits and housing completions.

The number of issued building permits was starting to decline in Q3 of the previous year, and this quarter’s issuances were a record low compared to previous quarters. The opposite trend was occurring in housing starts as the segment continued to increase quarter by quarter last 2018, but it instantly declined in the first quarter of 2019. Similarly, the number of houses under construction was on a quarterly rise since Q2 of 2018, but the trend eventually reversed as the first quarter of this year began.

It was reported in the Ottawa Citizen in April of 2019 that there had been tightness in the inventory in Canada’s capital city. Despite an abundance of construction since 2018, only a small percentage of them had been completed and posted for sale. Almost 40% of these completed homes were absorbed immediately in the same quarter. This was how fast homes were being absorbed in Ottawa, and yet completions were decreasing quarter after quarter, supporting reports of dwindling vacancy rates in Ottawa. This may result in a surge in home prices but, considering the decline in supply, may also result in homeowners being a lot more apprehensive in selling their current homes without first securing another property.

For the first time in recent Canadian history, homeownership rates in Canada fell between 2011 and 2016 and continue to decline. With a tight housing market in Ottawa, escalating home prices are further pulling home ownership out of reach for many first time home buyers. With continued government oversight and scrutiny into banking lending policies, families must now prove they can afford mortgage interest rates a couple of percentage points higher than what they negotiate with the bank. While these mortgage implications continue to change, they typically neglect to address a wide sector of the housing market representing new immigrants as well as first-time home buyers – two primary growth sectors of Ottawa’s population.

This is where private lenders can position themselves to capitalize on this growing market gap that is being left behind in their quest for home ownership. Not subject to the heavily regulated mortgage policies, CMI is able to provide for a convenient and straightforward lending framework to accommodate Canadians that otherwise would have received the rejection stamp from the banks.