The City of Hamilton is setting opportunities and upward trends in economic growth, education, tourism, manufacturing and innovation. This modern city is proudly rich in history and culture.

Hamilton has become known as the Steel Capital of Canada, being able to produce 60% of Canada’s steel products specifically by Stelco and Dofasco.

This city is strategically located at the west end of Lake Ontario, on Burlington Bay, 68 km southwest of Toronto, and 66 km west of Niagara Falls and the American border. As you go to Hamilton, you will enjoy the spectacular scenery of Niagara Falls, the vast trails of beautiful farms, generous nature and lively fairs of Hamilton areas.

Hamilton is known to be the third-highest foreign-born proportion in Canada, with over 20% of the people living as immigrants. This number grew by 8% between the 2001 and 2006 census. Most of the immigrants come from the Middle East and Asian countries, followed by the European demographic.

Unlike other cities, Hamilton is growing at a rather steady but slow rate, maintaining an average of 3.1% growth over five years. Much of this growth is contributed by individuals and families relocating from the busy Toronto lifestyle who would rather want to live in an area to break from the hustle and bustle.

The jobs popular in Hamilton come from manufacturing, law and healthcare industries. This includes administration, legal counsel and operations of which popular employers include the McMaster University, Stelco and ArcelorMittal. On average, Hamilton residents’ income is $47,495 a year.

For over 18 years, Hamilton has experienced a record low unemployment rate of 3.5 percent in March 2019. The data has been showing a downward trend in unemployment, which indicates that a large proportion of the population has been successful in finding stable jobs instead of transient ones.

Hamilton, dubbed as the “education city,” is known by its prolific educational sector thanks to its world-class university and college that continually tops student satisfaction ratings.

This attention to education has long fueled the needs of businesses and at the same time attracts investment into the city as it frequently produces a quality labour force and innovative entrepreneurial minds.

The director of economic development in Hamilton, Ontario has claimed the city for being the “most diversified economy in the country” according to the Conference Board of Canada.
Monikered as the Steel City, the area has been drawing in companies like KF Aerospace and is moving forward an industry engaging to more advanced manufacturing.
The same company has announced last year of the plan on tripling its number of employees and converting its current space in Munro International Airport with a $30 million dollar budget.
The labour market in this city has been relatively strong over a couple of years and is not going to stop anytime soon as 84% of employers and business-owners are hiring more for expansion – a need which can be easily filled by a vibrant youthful population of the city where 28% of the population consists of millennials.

Hamilton experienced a 4.2% increase from June of last year. It was reported that there were 1,203 residential property sales in the area in June this year. Despite this slight year-over-year increase, sales this June were still 10.5% less compared to this past May.

Closed deals involving single-family residential units picked up by 11.5% compared to the same month last year, even with the home prices increasing just over 5%. On the other hand, townhouses are decreasing in popularity by 3.9% as the prices of these homes increased, on average, by 3.6% to $499,523. The same scenario occurred with apartment-style housing, which suffered an 8% decrease in sales despite the 0.3% decrease in prices compared to June of last year.

The values of these permits, on the contrary, did not conform to the trend displayed on the number of issued building permits. Although April 2019 recorded the highest number of permit issuances so far this year, permit values tell a different story as values sit at the bottom valued at $92,110 which is a significantly lower by 48.8% compared to the same month of the previous year.
The highest recorded value of issued permits occurred in May at $273,105 which is 53.3% higher compared to the same month of last year and almost double (196.49%) from the previous month of this year’s $92,000 figure.

This year, a large portion of the housing construction commenced in April with a total of 461 total units in its first phase of construction. However, this is still notably (27.05%) lower than April of last year with over 600 recorded housing starts, also the highest in that year. Hamilton’s construction starts tend to go up predominantly during the second quarter and slowly decline in the subsequent quarters.

The monthly housing starts in 2019 didn’t were not as high as their corresponding months in the previous year. Notably, June this year recorded a total of 155 housing starts, which is a 71.6% slump from 546 housing starts of the same month last year, and the second-lowest since January this year. 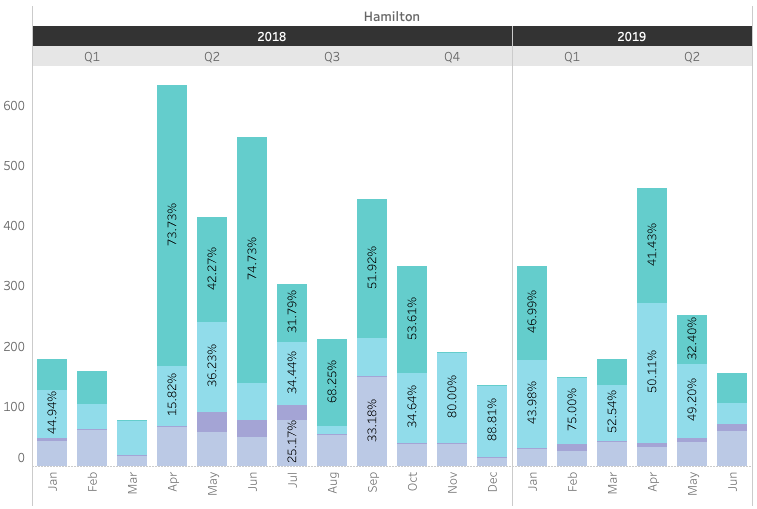 Row unit types generally dominated the Hamilton real estate scene in the first half of this year with 739 total starts, covering almost half or 48.52% of the total starts during the first six months. This is unlike the scenario last year wherein apartment type and other housing unit types comprised almost half of the housing starts, or 49.86%. Now, these housing types come in second overall in 2019, with 521 housing starts or 34.21% of the total. 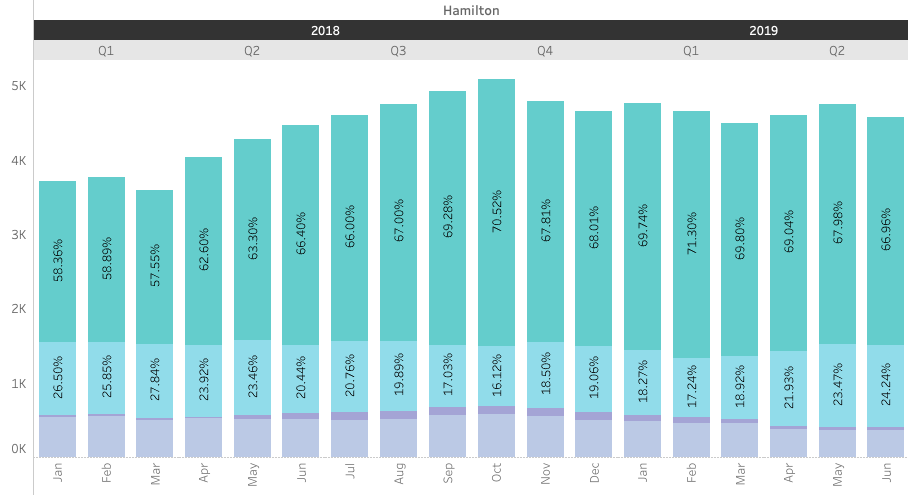 The number of unfinished homes in Hamilton this year rose moderately by a monthly average of 17.46% compared to the first six months of 2018. The highest increase, 28.36%, was seen in the first month of the year totalling 4,762 incomplete dwellings from 3,710 of January last year. On average this year, there are 4,641 partially-finished homes in Hamilton leading up to July, which represents a 5.8% increment from 4,387 average number of homes still in progress last year.

The quarterly completions in 2019 have improved by 91.31% with a total of 815 units completed in the first quarter followed by 25.58% in the second quarter with 787 completed homes as compared to the same time period last year. This improvement was seen across all months in 2019 peaking at 221.4% on year-over-year growth in January except in May, where there were 48.4% less housing completions compared to the same month last year. 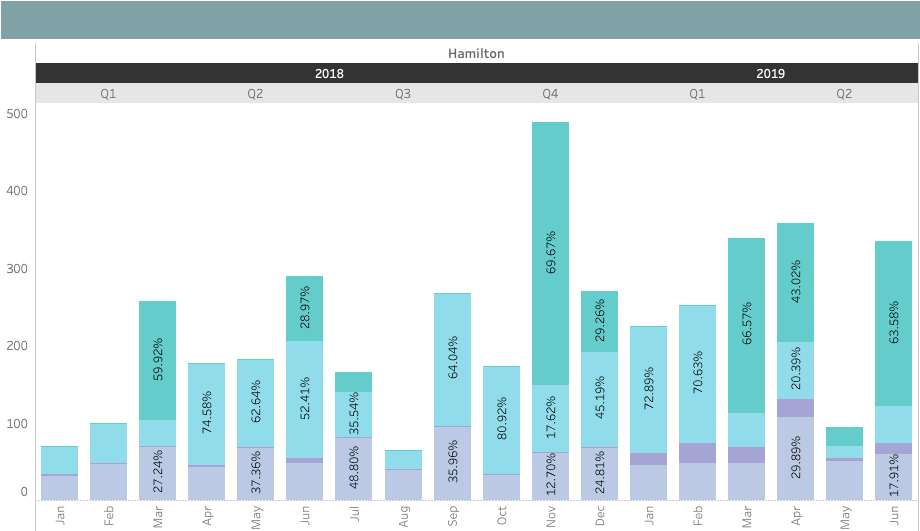 During the first quarter this year, the predominant residential housing type in terms of unit counts was row housing with 387 units
comprising 47.48% of total completed homes. However, during the second quarter, 391 completed apartment type units took the spot which amounted to almost half, or 49.68%, of the total completions during this period. All in all, more apartment type and other unit types of housing were completed in the first half of 2019.
This scenario is completely different from last year’s row housing dominance which covered 44.81% of total completions. The row units completed this year came only second with 524 units, just 6% less than the 616 completed apartment housing types from January until June 2019. Completed single-detached homes still ranked in third spot with only 358 completed units in the first half.

The first four months’ absorptions were not just following an upward trend, but also an increase in numbers compared to the previous year’s performance.
The start of 2019 witnessed 55 homes being absorbed, which accounted for a 17.0% increase compared to January 2018’s 47 closed deals. The absorption numbers peaked in April with 124, two times more than the same month of 2018’s 39 properties. However, it quickly plummeted down by 55.65% in May with only 55 properties sold, a slight 17.9% decrease from last year’s 67 absorbed homes. The absorptions promptly regained their momentum in the last month of the second quarter with 18 more home purchases, a 32.73% increase from the previous month.

The Hamilton real estate market has managed to maintain a fairly balanced housing market and continues to drive value opportunties when compared to surrounding peaking markets that seem to have priced out many individuals. Building permits, housing starts, and absorptions are slowly trending upwards, which indicates buyer confidence.
There is still a fair amount of residential construction happening in the city and is not seeing any decline in activity. The supply of completed dwellings in Hamilton is also seeing no drastic decline despite a slight 3.43% deflation of inventory occurring in the second quarter of 2019.

Among the issued building permits since 2018, just over half (59.97%) have been executed to start. This lag in execution will soon reflect in a higher number of starts and construction in the coming quarters this year.
There is still a substantial amount of available inventory as the market is still clearly on the buyers side with only 13.64% of the inventory absorbed in the market. However, this is not something to fret about since inventory being absorbed is trending upward and may potentially escalate with local government efforts aimed at making housing affordable to the people of Hamilton.

While there is a healthy volume of inventory on the market in Hamilton, building permit issuances regained ground in the second quarter along with an upward trend in housing starts could indicate investors have gained confidence in the future of the market. Buyers in nearby markets may be priced out and seek shelter in a more affordable housing market like Hamilton.
With strong levels of ongoing construction, absorptions will need to pick up to keep pace as they are only taking roughly a tenth of the supply recently. With relatively higher vacancy rates and considerable inventory available on the market coupled with further oncoming supply, it may be safe to be in a hold position before rushing into acquisition mode.