Canada’s housing market appears to have stabilized in recent months, though national sales activity remains above trend, signaling a continuation of the post-crisis recovery that began during the summer. For October, home sales rose in about half of all local markets, led by Montreal, major Alberta cities, and the Fraser Valley.

National home sales declined 0.7% in October over the previous month, although actual (non-seasonally adjusted) activity was up 32.1% annually, according to the Canadian Real Estate Association (CREA). Despite the modest monthly decline, many local markets continue to see “historically strong levels of activity.”

Sales increased in places like Calgary, Edmonton, Montreal, and in B.C.’s Fraser Valley. On the opposite side of the spectrum, sales were down again in the Greater Toronto Area, Hamilton-Burlington, Ottawa, and Greater Vancouver. However, CREA said sales activity was up in almost all Canadian housing markets compared with October 2019. 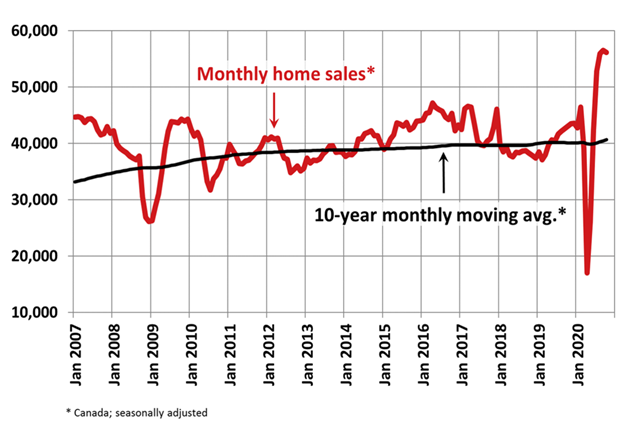 “For anyone waiting for the Canadian existing home market to begin to settle down following this summer’s surprisingly strong recovery, they’re going to have to wait a little longer. It was evident that the same trends we’ve been seeing since July – record sales and record prices amid tight overall supply – was once again the story in October.”

Canada’s labour market recovery continued in October, although the pace of growth slowed considerably from prior months as governments reintroduced partial lockdown measures to cope with a rapid rise in Covid-19.

The economy created 84,000 jobs in October, marking the sixth straight monthly gain, according to Statistics Canada, with the unemployment rate, dipping 0.1 of a point to 8.9% 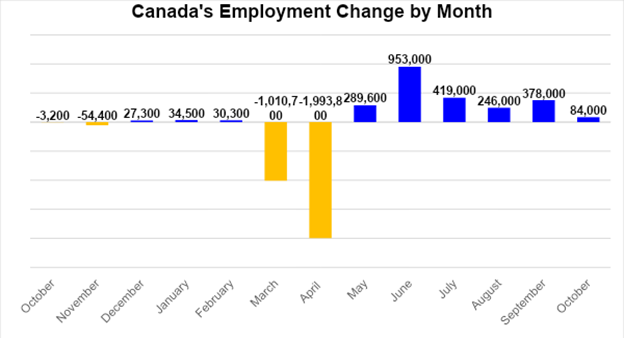 October was the sixth straight month of job creation in Canada, though the pace of new hires slowed considerably compared with September. | Data from Statistics Canada

While the labour market still has a long way to go before it fully recoups of all the virus-related declines, unemployment is up almost five points from an all-time high of 13.7% in May, when Statistics Canada reported the number of workers directly affected by the spring shutdown peaking at 5.5 million.

The annual pace of housing starts rose 3% in October, with much of the gains concentrated in single-detached homes in major urban centres like Toronto and Montreal, according to the Canada Housing Mortgage Corporation (CMHC).

CMHC said the annual rate of urban starts increased by 3.5% to 202,584 units. Groundbreaking for single-detached homes surged 14.3% to 57,788. New construction projects for other types of urban dwellings, including apartments and condos, edged down 0.2% to 144,796.

“For the last decade, highrise construction fueled housing starts thanks to millennials and international migrants vying for a little slice of the sky. But now, with immigration flows slowing, and a shift in preference for larger suburban homes, we could see a bit of a slowdown in condo construction.”

Wall Street and global stocks have risen dramatically since the Nov. 3 presidential election after early results showed a clear victory for Democratic candidate Joe Biden. Although the election is being contested by the Trump administration, investors are anticipating a smooth transition of power in January when Biden is inaugurated.

Markets have also been rising on news that two coronavirus vaccines have shown promising early results. On Nov. 9, Pfizer and BioNTech announced that their vaccine candidate was more than 90% effective in preventing Covid-19, further adding on Nov. 18 that final stage-three trials showed it to be 95% effective, with no serious side effects. In a 17 Nov. release, rival Moderna said preliminary trials showed that its Covid-19 vaccine is more than 94% effective in preventing the novel disease, meaning two effective vaccines will soon be seeking approval for widespread use.

The Dow Jones Industrial Average and S&P 500 have hit new all-time highs in November. In Canada, the benchmark TSX Composite Index gained more than 8% through the first two weeks of the month. 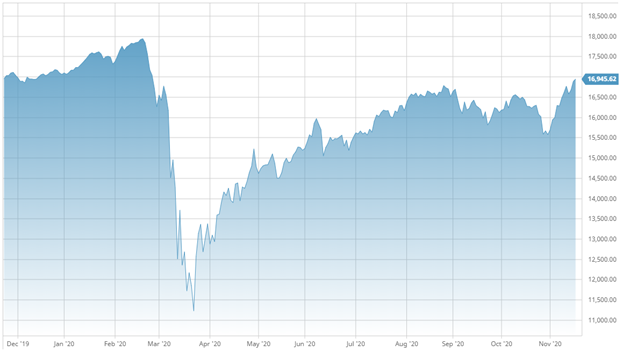 The TSX Composite is trading at its highest level since February. | Chart: barchart.com

Canada’s housing and mortgage markets remain on solid footing in the fourth quarter despite some uncertainty due to Covid-19. Closed borders, partial lockdowns and a deceleration in immigration have spilled over into the residential condominium market, especially in highly dense urban centres like Toronto. Beyond that, however, the demand for single-family homes remains robust.

Looking ahead to the remainder of the year, the focus remains on containing Covid-19. Prime Minister Justin Trudeau says Canada expects to be able to start distributing an effective Covid-19 vaccine by early 2021.

The CMI Group will continue to analyze market changes and keep you updated on a regular basis. Visit our website to learn more.