CMI State of the Market: Housing Markets Continue to Stabilize at the End of Summer

Canada’s housing market is in the midst of a healthy retracement following a record surge through the first quarter of 2021, as sales and listing activity continued to moderate through the summer.

National home sales fell 0.5% in August, marking the fifth consecutive monthly decline, according to the Canadian Real Estate Association (CREA). The August reading marked the smallest drop during the five-month downtrend, raising cautious optimism that the worst of the decline has passed. The number of newly listed properties increased by just 1.2% during the month, as supply constraints continued to drive up property values.

The MLS Home Price Index increased by 0.9% during the month and 21.3% annually.

Home sales remain well above the 10-year monthly average but have moderated significantly since the first quarter. | Source: CREA

Canada’s housing market is presently characterized by buyer fatigue and low inventories, which have helped to fuel a sustained rise in property values, according to RBC economist Robert Hogue. These factors have contributed to a moderation in sales across several major markets, including Ottawa, Montreal and Edmonton.

“We expect this trend to spread to other markets as affordability issues weigh more heavily on buyers, and the reopening of spending avenues take some budget room away from housing,” Hogue said.[1]

Canadians enjoyed record savings during the pandemic, as employees who were unaffected by lockdowns began to work remotely, lowering the cost of transportation, recreation and dining.

Even as the country struggles with a fourth wave of COVID-19 infections, Canada’s labour market is showing further signs of recovery. In August, employers added 92,000 jobs, marking the third straight monthly increase, according to Statistics Canada. The unemployment rate edged down to 7.1% from 7.5% in July.

Notably, the bulk of the August job gains were in full-time work, which is a positive sign for the economic recovery. At current levels, overall employment is within 156,000 – or 0.8% – of its pre-pandemic levels.[2]

Job creation has been a net positive in Canada since June. | Data source: Statistics Canada.

After a record-breaking August, Wall Street and Canadian stocks declined through the first half of September, as investors continued to evaluate the economic recovery and clues about potential changes to monetary policy. Despite a multi-week pullback, Toronto’s benchmark TSX Composite Index remains well above 20,000, an all-time high first reached in June. 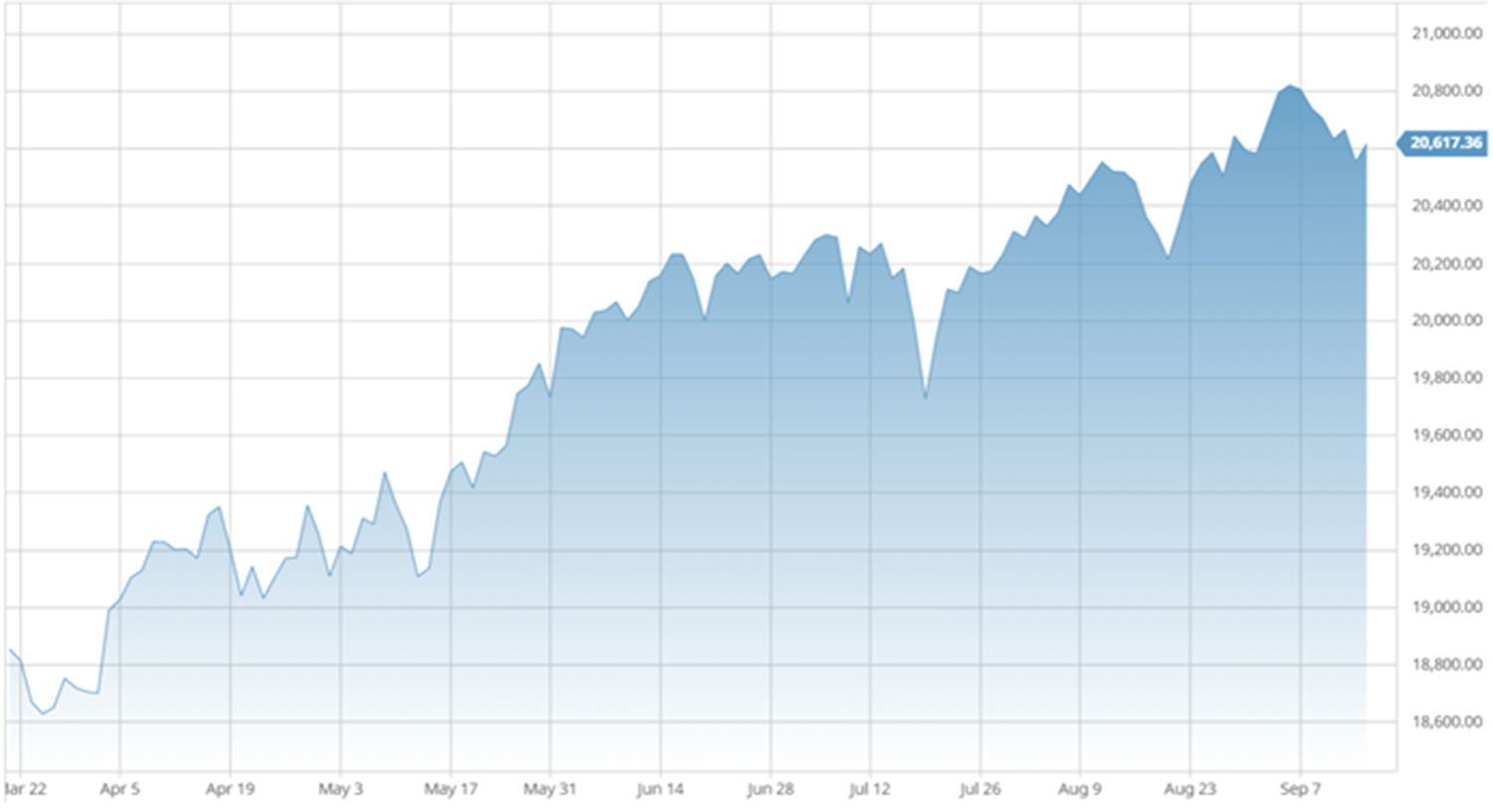 The TSX Composite is in the midst of a pullback following a record-breaking summer. | Source: barchart.com

Nation-wide, the seven-day average for COVID-19 infections has been on the rise since early August. While Canada continues to battle the virus, high vaccination rates suggest that local governments may be able to avoid province-wide lockdowns in the fall. The health of Canada’s recovery depends largely on a broad economic reopening, which is currently underway.[4]

CMI Financial Group will continue to analyze market changes and keep you updated on a regular basis.