Canada’s housing market showed signs of moderation in April, though underlying conditions remained highly favourable amid strong demand and constricted supply. Despite a month-to-month decline in sales, actual activity was up 256% year-over-year, according to the Canadian Real Estate Association (CREA).

As the following chart illustrates, monthly home sales remain well above the historical average — so high, in fact, that a moderation is considered by many analysts to be healthy. Parabolic increases are rarely sustainable and consolidation is often a sign of stability. 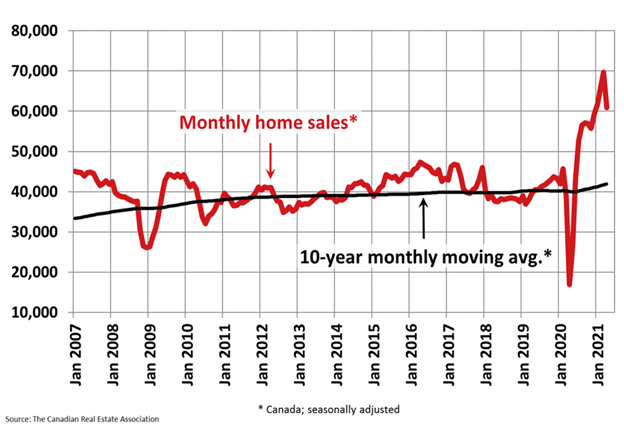 Canada’s economic rebound ran into resistance in April, as the resumption of government lockdowns resulted in a net loss in overall employment. The labour market lost 207,000 jobs during the month, with the bulk of the declines concentrated in Ontario. Canada’s most populous province has been in lockdown since April 3 to combat a troubling rise in Covid-19 infections.

Full-time employment declined 0.8%, while part-time work decreased by 2.3%. Losses were widespread across industries, with retail trade and accommodation and food services leading the declines. The number of Canadians working from home increased by 100,000 to 5.1 million.

The national unemployment rate spiked to 8.1% in April after falling to 7.5% in March, its lowest since before the pandemic. 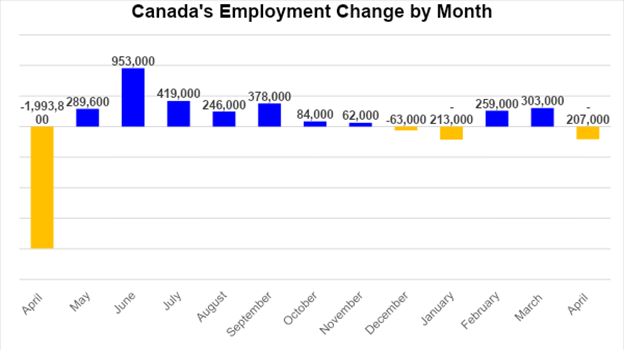 At the surface, home resales and new listings are much higher than a year ago when government lockdowns first began. However, a focus on seasonally-adjusted monthly data reveals “signs of moderation” across several housing markets, according to Robert Hogue, chief economist of RBC Economics.

“After soaring to outer space in prior months, home resales came down to a lower orbit—still generally strong but less excessively so—in Vancouver, Toronto and Ottawa,” Hogue said, adding that Montreal had “lost some altitude,” whereas Calgary and Edmonton remained in a sharp upward trajectory.

The RBC economist also noted a significant uptick in condo-market demand across the country—a trend that’s expected to continue due to affordability challenges associated with single-family homes.

After a record-breaking start to the month, Wall Street and Canadian stock indexes declined in the second week of May, as investors began to dump growth plays in favour of defensive sectors and other risk-off assets. An alarming rise in the United States inflation rate also worried investors about the longevity of central-bank stimulus. The technology-focused Nasdaq Composite Index led the declines, falling 7.8% between Apr. 26 and May 12. The S&P 500 and Dow Jones Industrial Average also declined sharply, with the benchmark Canadian S&P/TSX Composite Index following suit.

A measure of implied volatility known as the CBOE VIX flashed a warning sign on May 12, rising to levels that are typically associated with recession. The index peaked near 30, the highest since March.

Despite the sudden drop in equity values, markets quickly recovered on May 13 and 14, with the CBOE VIX falling back below the historically neutral 20 range. 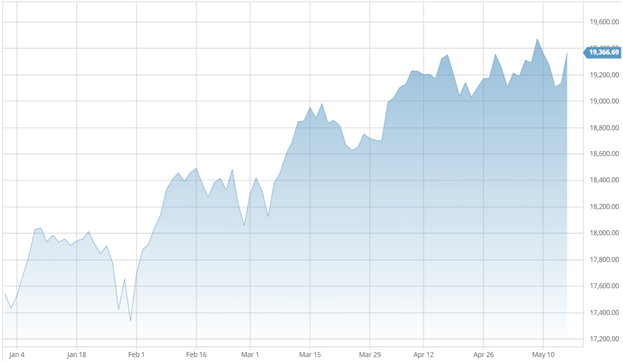 Canada appears to have turned a corner in its battle against Covid-19, with the seven-day average infection rate showing a sharp decline since the latter half of April. An aggressive vaccine rollout by the federal and provincial governments has raised optimism that the worst of the third wave may soon pass, leading to a broad reopening of the economy in the second half of the year. In the meantime, the province of Ontario has extended its shelter-in-place orders until June 2.

The CMI Financial Group will continue to analyze market changes and keep you updated on a regular basis. To learn more about our investment opportunities fill out the contact form below, and one of our Investment Managers will reach out to you within 24 hours.